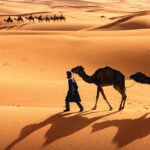 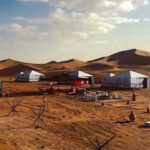 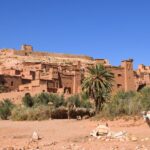 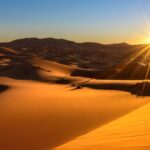 FROM MAKE A RESERVATION $ 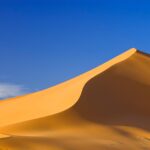 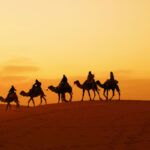 FROM MAKE A RESERVATION $

Morocco Tours from Fez: Fez is an Imperial City that has stood in the north of Morocco for a thousand years. Within its sturdy walls you’ll find the place where old Morocco still exists – in the elaborate architecture, the historic medina and the throngs of people that make their home here.

Walk through high walled streets, watch the daily procession of mourners entering the tomb of Fez’s founder Moulay Idriss II, and see the ornate carvings and mosaics on every surface; it’s easy to understand why Fez is called the spiritual heart of Morocco. Time seems to have stopped in large parts of this city, nowhere else can you find such a strong link to the kingdom’s past.

But it’s not a place untouched by modern comforts – there are plenty of five star hotels to stay in and restaurants to eat at. Fez is an inspiring blend of old and new.

Fez’s long history and cultural significance mean that this is a great place to visit if you enjoy festivals.
Four Moussems are held in or around the city every year: Moulay Abdallah ben Brahim is celebrated in May, Sidi Lahcen ben Ahmed in August and September has two: Maulay Idriss II and Moulay Idris Zerhoun. These festivals are full of life, colour and traditional entertainment; ideal for a tourist looking to uncover the cultural side of Fez.

Just outside Fez, the Cherry Festival is held every June on the slopes of the Middle Atlas. The festival includes music and markets, a stunning procession by torchlight, sporting competitions and the election of ‘Miss Cherry’.

And October is your chance to see one of the major highlights of the festival calendar. The Tissa Fantasia horse festival is an unforgettable spectacle as hundreds of thoroughbred Arab-Berbers, Arab stallions and Barbary mares are put through their paces in displays over ten days.

You know how it is when you get something in your head and it just sticks there? That’s how it was with me and the Medina of Fez.

I was probably around nine or ten when I first saw it, probably on a travel programme. I was instantly captivated by the sheer otherness of this ancient place.

The crowds of people in exotic clothing talking nineteen to the dozen in some elaborate conversational dance where seemingly no-one listened to the other but meaning was clear. The colourful stalls, spilling over with brightly coloured carpets and spices and shiny pots and a hundred other things.

It was a world away from the Sunday morning car boot sale in my British town. I wanted to be talked at by five different people at once in a language I didn’t understand. I wanted to be the one haggling fiercely over the price of a leather purse. I wanted to lose myself in the twists and turns of the ancient Medina streets while eating a pastilla bought from a local food vendor.

I wanted to be there.

It was a dream that I carried with me for over a dozen years until one day in my twenty-fourth year I finally stood, fresh off the bus from the airport, outside the triple arched Bab Boujloud Gate, the gateway to the Medina of Fez.

As I’d devoured everything I could find on the subject of the Medina, I was confident that I’d be immune to the culture shock that seemed to strike everyone on their first visit. But stepping through that gate and into the large square beyond was one of the most exciting moments of my life.

At first there was little sign of the crowds that the Medina of Fez is so famous for, but once I’d chosen a street to head down I soon found myself submerged in a stream of people, with stalls of every description forming the banks. The noise in those narrow alleys was incredible – a hundred voices chattering at once in Arabic and French, the cries of chickens and other livestock for sale, the clatter of machinery, the hiss of cooking fires, and every now and then the wail from multiple minarets as the call to prayer went out. I went from stall to stall, alleyway to alleyway, absolutely enthralled. One moment I was looking at brass cookpans, the next I was standing in front of a wall of slippers in every colour of the rainbow, the next I was stepping aside as a small caravan of donkeys plodded past, laden down with their wares.

I must have walked for miles that day, just following my nose, through fancy archways and past crumbling walls, discovering new things at every turn – an ornate mosaic behind an ancient palm tree, a secret garden bordered by rose bushes, a stall selling iphones and chicken legs – it was everything I’d hoped the Medina would be and more.

Finally, as the skies started to darken, I found a riad to stay in, and after a delicious meal of lamb tagine (what else would I have?), it was with a weary tread, but deep sense of contentment that I climbed into my soft bed. Tomorrow I would hire a guide to take me to the places of the Medina that I hadn’t managed to stumble upon, including the tannery, but for now I, and my nine year old self, were content.

Discover the treasures of the medina or Fez-El Bali. This UNESCO World Heritage Site is the largest non-vehicular area in the world, and a unique living and universal museum.

Start your visit by the main gateway of the Medina, Bab Boujloud, the Blue gate and get lost in a medieval labyrinth of narrow streets with countless masterpieces of architecture and historical gems. Do not miss a stop at the Madrasas, Al Attarine and Bou Inania, witnesses to the city’s intellectual and scientific past, and continue to the Quaraouiyine which is the world’s oldest library.

Make sure you visit the artisans’ shops: coppersmiths, potters, weavers, tanners, turners, goldsmiths … it is a fascinating experience watching them working with skills handed down through the ages. Your walk will then lead you to Foundouk Nejjarine, an ancient caravansary that was turned into the Musée des Arts et Métiers du bois (Museum of Woodworking). The top floor of the Foundouk has an amazing panoramic view of the city’s rooftops.

Ask for directions to the famous Tanneries. Every day the tanners here work hard to produce the fine quality leather that is used to make the famous leather that is worked into the clothes and goods you see on sale across the souks of Fez and further afield.

The best way to explore the Medina and not miss anything is to take a guided tour tailored to your main visit’s interests.

It’s time to leave Fez behind and head out to discover the ancient Roman settlement of Volubilis. This UNESCO World Heritage Site is around fifty miles to the west of Fez and can be easily reached by taking a Grand Taxi direct to the site. When you arrive you will be greeted by the sight of low stone walls, towering columns, Roman arches and sturdy gateways. As you explore, with or without a guide, you’ll discover more treasures – ancient mosaics, Corinthian headstones, the remnants of the public baths, carved olive presses and more. Much of it has stood for over two millennia, and you really get a sense of history while walking around the site.

On the way back call in to Meknes, one of Morocco’s Imperial cities and a UNESCO World Heritage Site. It’s a modern city with a relaxed atmosphere and a lot of historical monuments that are worth seeing such as Bab Mansour, the enormous Agdal Basin, the Dar Jamai museum of Moroccan Arts and the Mausoleum of Moulay Ismail, who was the second ruler of the Moroccan Alaouite dynasty.

Start your day with a visit to Jnan Sbil. These beautiful gardens were first planted over a century ago and were opened to the public by Moulay Hassan, Sultan of Morocco from 1873. They have undergone extensive renovation in the last few years to restore them to their original design, giving visitors a taste of nineteenth century Fez. In particular, look for the famous waterwheel, a reminder of the way things were powered when the gardens were first built.

Continue to Fez-El jdid, the Jewish Quarter and spend some time in the jewellery market.

Then travel to the outskirt of the medina walls to visit the Merenid Tombs which sit on a hill overlooking Fez. This necropolis is thought to have been built in the fourteenth century to be the final resting place for the rulers of the Merenids, who conquered Fez in 1250 and turned it into their capital. Even though much of its splendour has been worn away by the passing of time, it is easy to get a sense of its scale by the structures that remain. It’s also a perfect place to overlook the whole of Fez, an unbeatable view that is made even more special when the sun goes down.

If you have time during your stay, plan to go to Hammam, a Moroccan traditional bath and enjoy cleaning your body with ancestral treatments and beauty rituals using 100% natural products from the region: essential oils, Fez clay, savon beldi, henna… or for more fun, take a cooking class and have a recipe to take home.